Melanie's testimony highlights themes from the majority of previous testimonies: rapid relationship escalation, neglect of the relationship, exploitation of an experience differential, as well as an 8 year age gap, broken agreements, refusal to recognize someone else's experience as valid and general passivity. There was also sexual coercion followed by gaslighting, as she described in an email to Eve, Amber and Lauren, and confirmed to me.

...the weird group sex situation with Franklin, Vera and Chrissie left me very emotionally unbalanced. I broke down crying in Vera's arms afterwards, though I completely misunderstood my reason for crying. I went with their narrative that such open honest intimacy was just a bit too intense for me. In hindsight it was that I was navigating a vulnerable situation with little to no boundaries and had no way of tapping out of it.Melanie's email to Eve Rickert, Amber and Lauren, May 14, 2018

During the review process of her piece, Melanie noted a correction of the timeline.

"The break up happened around Feb of 2012 and the subsequent conversation where we tried to post mortem was in the spring of 2012. So that means F and I were probably “officially” together for 2 years"Melanie corrects timeline in IM, July 24, 2019

When Melanie's testimony was reviewed by Samantha Manewitz, the licensed therapist on the survivor pod, what stood out to her was the following,

It’s also interesting that Franklin makes a lot of demands about connections and what types of connections he wants his partners to make with each other. Whereas any demands made on him for any type of emotional labour is interpreted as something negative like jealousy, or something which is an endemic problem with the person he's talking to."

There are also two other aspects to consider.

The first is a newly emerging pattern: that Veaux seems to have had some sort of script he ran with––from the innocent announcing of a crush to the more problematic framing of extolling courage in order to step outside the comfort zone, a tactic with which he appears to have unduly influenced several of his partners to cross their boundaries.

And the second, is how these ideas impact the world at large through More Than Two. 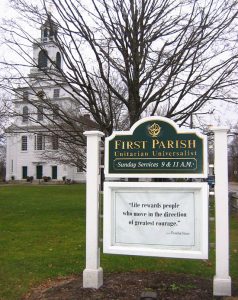 As far as I can ascertain, this idea first appeared way back on April 5, 2004, in the context of being daring enough to make a spontaneous roadtrip to Boston with Celeste and Amber, which was rewarded by new experiences with new friends. But Veaux developed it more seriously later that same month into the following shape:

"I've generally held a zero-tolerance policy toward people who aren't honest with me or with those around me. I've walked away from a few friendships because the friend in question is dishonest, or shows a pattern of dishonest or untrustworthy behavior.

Yet, at the same time, i don't always believe that honesty of and by itself is a moral virtue. [...] It's not actually a lie, per se, that ticks me off. It's what the lie represents. And specifically, it's what the lie reveals about the liar's courage.

[...] whether you can count on someone when things are hard that is the true measure of a person. Courage is a cardinal virtue; a person who has courage can be trusted, can be relied on." - Some thoughts on truth and virtue, April 20th, 2004

This is an example of a seemingly good principle which can also be easily weaponized; i.e. if you don't demonstrate courage in whichever situation is under consideration, then you are not trustworthy and cannot be relied on. Equally, it's not actually true, since it is entirely possible to be courageous in some areas and untrustworthy in others. Veaux hypothesized such a principle in order to suit his own mental models and extrapolated it to apply to everyone else. It's also worth remembering that at the time of this post in 2004, Celeste had been "encouraged" to face her fears, and was feeling coerced into relinquishing her own boundaries, as Amber had moved into the marital home—although Veaux considered that her concerns to be nothing more than her own monogamous insecurities.

And Amber now says that her boundaries were crossed on multiple occasions, whilst her own "courage" and ability to tolerate pain were constructed as a direct result of having to manage the suffering caused by her relationship with Veaux.

Courage as a concept has made it into More Than Two as one of five main themes:

"The second theme is courage. We suggest many approaches to relationships that require confronting socially imposed norms and our own fears, and that takes courage. When many people think of 'courage,' they think of a firefighter charging into a burning building or a person facing down a hungry leopard—extraordinary acts of bravery in the face of danger.

The kind of courage we mean is a more personal, ordinary thing: talking about our feelings even when we’re afraid; giving a partner the freedom to explore new relationships even when we fear being abandoned; challenging ourselves to step outside our comfort zones even when we aren’t sure there will be someone there to catch us."

Yet what is courageous for one person can be foolhardy for another, and only the person concerned can know what is true for them. As Melanie says,

That gave me a lot of hindsight around the idea of why did I continue going forward in this relationship through times where I was distinctly not comfortable with what was happening.

And I realized that a good deal of it had to do with the fact that I was trying to follow that idea of moving in the direction of courage, instead of actually just listening to my instincts. Melanie's audio testimony

Melanie describes Veaux's influence as "drinking his kool-aid." She also describes that as  a "Franklin Follower," she herself developed unkind and non-empathetic ways of dealing with people (although the responsibilty and repair for that lies with her).

I even think back to when I was chatting on chat boards about polyamory on stuff like that and realizing that I was [...] being an asshole to other people, who were having very human issues.Melanie's audio testimony

Which leads me to discuss a second issue–: the elephant in the room.

When a book about ethical relationships is co-written by someone who turns out to have a pattern of harm, the ensuing harm and impact has the potential to be magnified. The question is still outstanding:  how many of Veaux's mental models which resulted in trauma have been translated into his work? Have the principles he weaponized against the women in real life been encoded into the blueprint that many now follow, whilst believing they're doing polyamory ethically?

Evidence of this phenomenon has already come to light as a consequence of this work, as per one Reddit user:

Figure x: Reddit User Claims that Veaux and Rickert's words were weaponized against her

When people copy the words and actions written by a recognized expert, in a self-help guide deemed ethical, and can easily, even inadvertently, weaponize them in the same way, then we need to act.

Since this #metoo work has made the harm now potentially foreseeable, the authors have a duty of care to modify their book.

Melanie does not consider her relationship with Veaux to have been abusive, especially not in comparison with the "full-on toxic" relationship she had with Sylvia.

From my own point of view. I really felt that, I mean I felt like I had to get out of that relationship because I knew I couldn’t stay safe in it. And so I think I’m one of the people who managed to get out before any huge amounts of damage were done.Melanie's audio testimony

But there were still plenty of red flags. 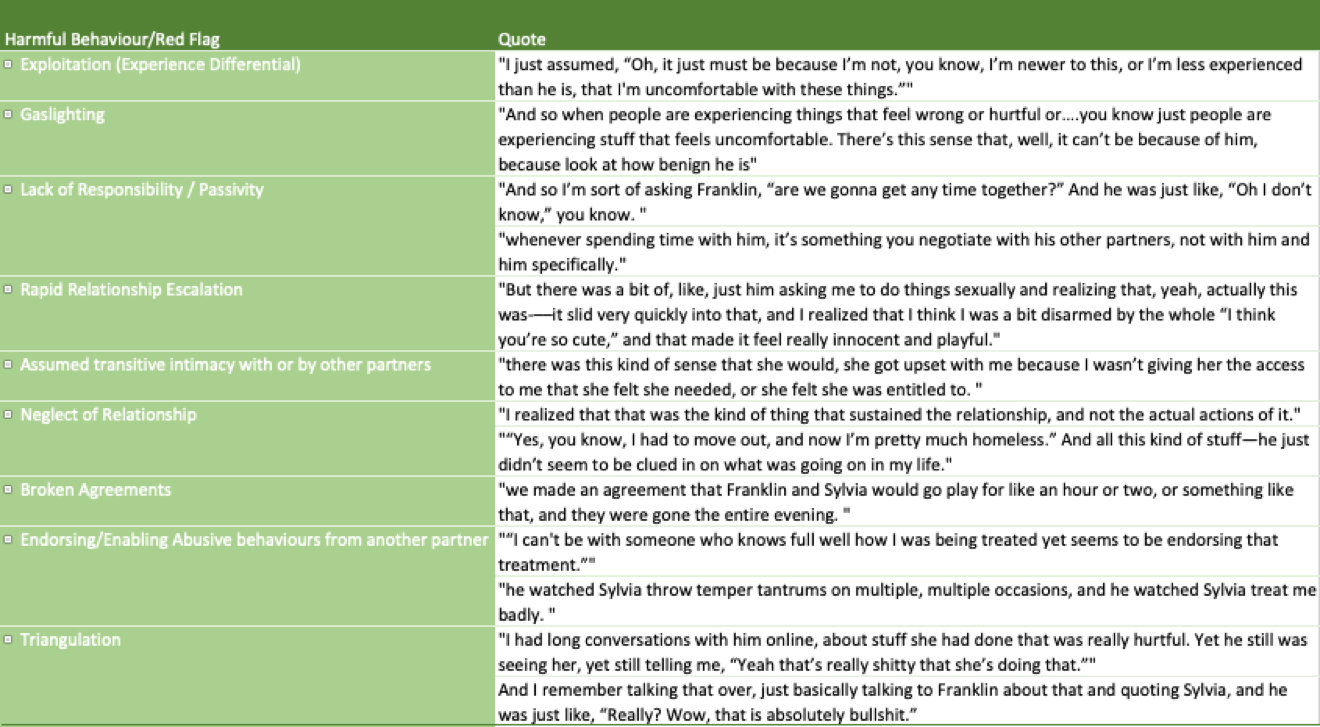 However, Melanie's testimony also throws into sharp relief one of the patterns of harmful behaviour published by the Survivor Pod in their pdf "Public List of Harms" several months ago now.

"Triangulation: Giving conflicting accounts of the same events to different partners, and giving conflicting accounts in public vs. in private. Telling each partner secrets about other partners in a way that sows conflict and increases isolation. Misrepresenting his partners’ feelings, needs, actions, and intentions to his other partners and in public. Refusing to set boundaries or make choices, then letting his partners absorb the fallout while he claims helplessness."

The reason why this behaviour becomes so obvious here is because Melanie was in a romantic relationship with both Veaux and Sylvia.

the same week that Melanie ended her relationship with Veaux, he wrote an entry on his LiveJournal called "Some Thoughts on Dating Black Belts," in which he claims that he is "not a beginner's relationship." While the timeline makes it murky whether this was a dog-whistle to Melanie, a reaction to her setting boundaries of to the conflict they were experiencing, what is clear is that "not a beginner's relationship" is a neg. "Negging" is a word coined by the pick-up artist community and refers to a sort of back-handed compliment meant to leave the target off-balance and seeking the pickup artist's approval.

This idea has become embedded in the set of Veaux's scripts in his current chosen forum, Quora. 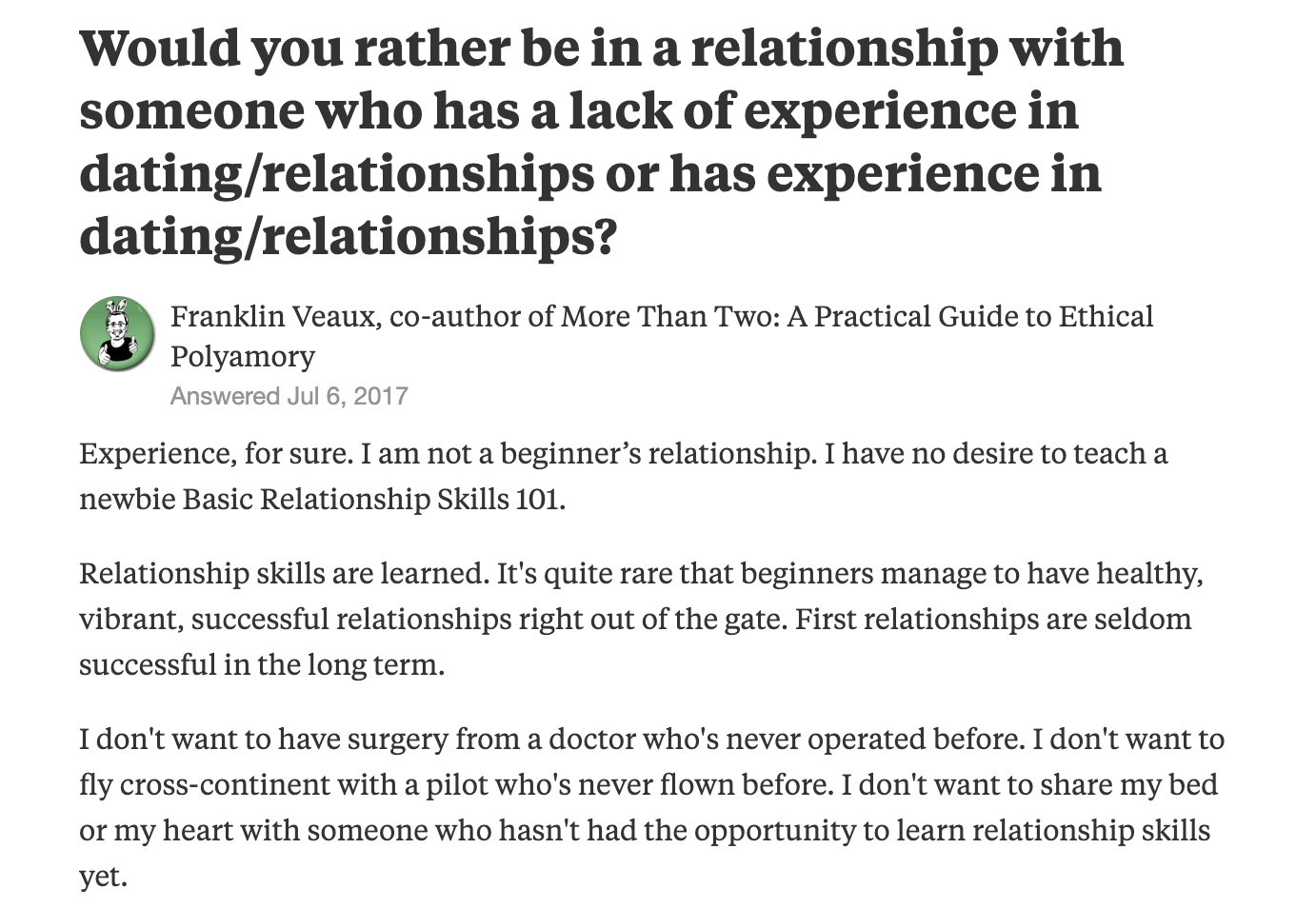 Figure X: Veaux's script 'not a beginner's relationship' makes it onto Quora, 2017

By claiming the label "not a beginner's relationship," Franklin makes clear that if you are to be in a relationship with him, you will be evaluated, lest any pain you experience be seen as evidence of being "a beginner"—and therefore not compatible with Veaux.

“You have to be exceptionally actualized as a person in order to be in relationship with me.” Which is actually, no, you need to have thick skin to be in a relationship with someone who doesn’t actually know how to empathize with you.Melanie's Audio Transcript

Finally, Melanie not only intimately interacted with Veaux directly, but she was also, as the first one of Franklin's exes Eve reached out to (six months before that relationship ended), a witness to the harm Eve experienced.

Yet until Eve searched for the patterns, Celeste and Amber lived with blame and trauma for years; Melanie, Elaine and Lauren just "thought he was a bit of a dick"; others, like Lisa and Joanna, "just circumvented it and carried on just knowing that there was intent there."

None of the women were aware of the others' experiences. They didn't know that they were part of a broader, more systemic pattern of exploitation by an intelligent man who had positioned himself as an expert on polyamory, but who seems ultimately to have designed the principles he preaches in order to escape the consequences of his own irresponsible, experimental and often harmful behaviours.

What strikes me is all the commonalities in these stories where you have somebody who's offering themselves up as an expert communicator and advice giver who doesn't walk the talk. The economic issues come up over and over again, and there is this vibration of frustration to varying degrees that seems to lift off the pages. It’s all about over promising and under delivering at all levels of interaction, and at all levels of relationship.

It reminds me of the structure of high control groups and the proliferation of undue influence. Part of a way to do that is create a certain amount of cachet, celebrity and access. Access then becomes currency in these types of dynamics. So it makes sense that whether this was done consciously or not on Franklin's part, one of the things keeping all of these women tied to him, is their attempt to attain access to him, in some way or another.